Human-caused global warming is accepted by leading scientific organizations around the world, but public opinion about humanity’s role fails to keep pace with these consensus views. Internet blogs contribute to this gap by casting doubt on iconic climate science topics, such as polar bears and sea ice extent, setting them up as “keystone dominoes” to topple scientific understanding.

A study analyzing this trend is published today (Nov. 29) in the journal BioScience under the title “Internet Blogs, Polar Bears and Climate-Change Denial by Proxy.” Led by the Netherlands Institute of Ecology, it is co-authored by an international team of researchers, including faculty at the University of California, Davis.

4. Follow the language — Climate deniers often attack those with different views with insults, such as “eco-fascists,” “fraudsters” or “green terrorists,” or by accusing them of being part of a global “scam” or “hoax.”

— criteria described in the study

The authors analyzed 90 blogs that covered climate change. None of the blogs were truly in the middle. Instead they fell into one of two camps: 45 were science-based and 45 were denier blogs. These camps each took completely different positions on Arctic ice extent and polar bear status.

“We found a major gap between the facts from scientific literature and the science-based blogs on one hand, versus the opinions ventilated in climate-change denying blogs on the other,” said first author Jeff Harvey from the Netherlands Institute of Ecology. “This is a very dangerous gap, as these blogs are read by millions.”

Of the 45 denier blogs, about 80 percent relied on a single denier blog for their evidence, which itself had a single author who had not conducted any original research or published any articles in the peer-reviewed literature on polar bears. This lack of expertise and evidence is common among such blogs, the study says, as are personal attacks against researchers and attempts to misstate the extent of scientific certainty about crucial issues. 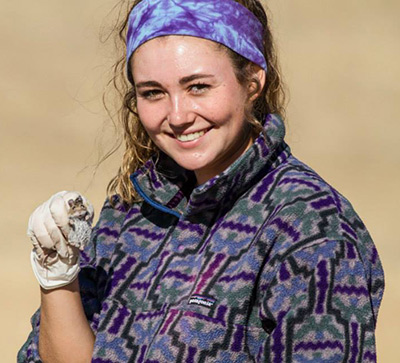 Interested in a career studying wildlife and its habitat? This major prepares students who are dedicated to animal conservation and interested in the resolution of conflicts between people and wildlife. Students learn hands-on research skills and work closely with wildlife conservation organizations. Read more on our majors blog.

The research team included ecologists, polar bear researchers, climate scientists, science communicators and sociologists from six countries. They conclude with a call to action for scientists to venture beyond the confines of their labs and lecture halls to engage the public and policymakers, as well as to counter misinformation on social and traditional media directly.

“Climate change deniers use deception to sow doubt and confusion, influence public perception, and stall meaningful action,” said co-author Eric Post, a professor in the Department of Wildlife, Fish and Conservation Biology and fellow with the John Muir Institute of the Environment at UC Davis. “We have an obligation as researchers and academics to expose these tactics. There are no alternatives to facts.”

The study received no external funding.