The Last Stop: When There’s Nowhere Colder to Go

Fish have been migrating to cooler water over the last several decades as the ocean warms. But in Antarctica, the coldest place on the planet, polar species have nowhere to go.

Marine life in Antarctica is especially vulnerable to climate change, which is warming oceans throughout the world. Anne Todgham, an animal scientist at the University of California, Davis, is studying how — and whether — polar fish will adapt to the changing conditions.

Preliminary results indicate that the polar fish have been able to acclimate to warm water or to higher levels of carbon dioxide, but not both together.

“They have evolved to live in very cold, stable conditions and they already live in the coldest, most stable ecosystem on Earth,” said Todgham, an associate professor in the UC Davis Department of Animal Science who specializes in how aquatic life copes with changing environments.  Todgham studies stress in sea creatures in a wide variety of locations, including the ice-covered continent at the southern tip of the globe.

The research sheds light on the possible fate of many sea creatures, including ones we depend on for food.

Oceans absorb about one-third of the CO2 humans release into the atmosphere. That may be good for the air, but it is hard on the health of the sea. Climate change and marine pollution is stressing virtually all aquatic life, but Todgham says polar species may have it the worst.

“Cold water holds more CO2, so carbon dioxide levels are rising very fast in Antarctica,” Todgham said. “Polar species are generally long-lived—80-plus years, in some cases—so they can’t evolve fast enough to keep pace with warming water and rising acidity. They can’t migrate to colder water. They have to cope by recruiting their existing physiology, and so far that doesn’t look very promising.”

Antarctica is nearly 9,000 miles from California, but in terms of environmental changes, it is right next door.

“Ocean warming and acidification is happening all along our coastlines, affecting many species we rely on for food like oysters and Dungeness crab,” Todgham said. “So this work has application well beyond Antarctica.” 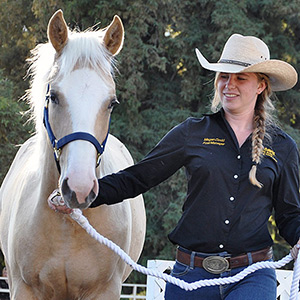 Interested in a career studying topics like this? The animal science major at UC Davis is great for professional careers in research, veterinary medicine, human medicine, animal care and the food industry. Students receive a broad education about livestock, working animals, pets and fish, while also studying the core sciences. Read more on our majors blog.

Studying fish in Antarctica is not for the cold averse. Todgham has made three trips to the frozen land, all of them during the polar summer when temperatures range from freezing to 35 degrees below zero. She sleeps in a heated dorm at McMurdo Station, a U.S. research center on Ross Island, one of the southernmost islands off Antarctica.

Todgham studies two polar fish species—the naked dragon fish and the emerald rockcod—that live in the dark waters beneath thick sea ice. To reach the fish, researchers drill through nine feet of ice and scuba divers search for the species’ eggs and juveniles in polar water where even the worms and sea spiders are supersized.

“Cold water holds more oxygen, so aquatic life can get really big down there,” Todgham explained.

Researchers transport the specimens in temperature-controlled vehicles to the research station to keep them alive. Polar species have special proteins in their bodies that act like anti-freeze so they can survive in the icy water.

Back at the research station, Todgham and her team place the eggs and juveniles in plastic buckets with water that is 2 degrees Celsius, a temperature scientists predict will be the norm in 80 years. Researchers pump in various levels of CO2 via colorful tubes that snake in and out of each bucket.

For several weeks, Todgham measures how the fish cope. She looks at gene expression, the cellular stress response, metabolic changes and physiological factors like activity level and growth rates.

“We’re trying to predict how each species will cope with warmer water and higher CO2 emissions,” Todgham said.

The short answer: not well.

“They have been able to acclimate to warm water or higher levels of CO2, but not both together,” Todgham said. “That’s not good, since ocean water everywhere is already rising in both temperature and carbon dioxide.”

Polar fish have nowhere colder to go, but so far, it looks like other species have not migrated in to their ecosystem. Antarctica is ringed by a circumpolar current that acts like a barrier, so it would not be easy for aquatic creatures to migrate in.

“Except for the crabs,” Todgham says. “It looks like they can enter by marching along the bottom.”

The native species Todgham studies are an important food source for seals, penguins and larger fish so their demise could have a cascading effect throughout the food chain. And the polar species may be a bellwether for what is developing in our own backyard.

“We’re identifying populations that are particularly vulnerable so we can help protect them from direct threats like overfishing,” Todgham said. “And I am encouraged by all the students who are pursuing the study of natural species. They give me hope.”