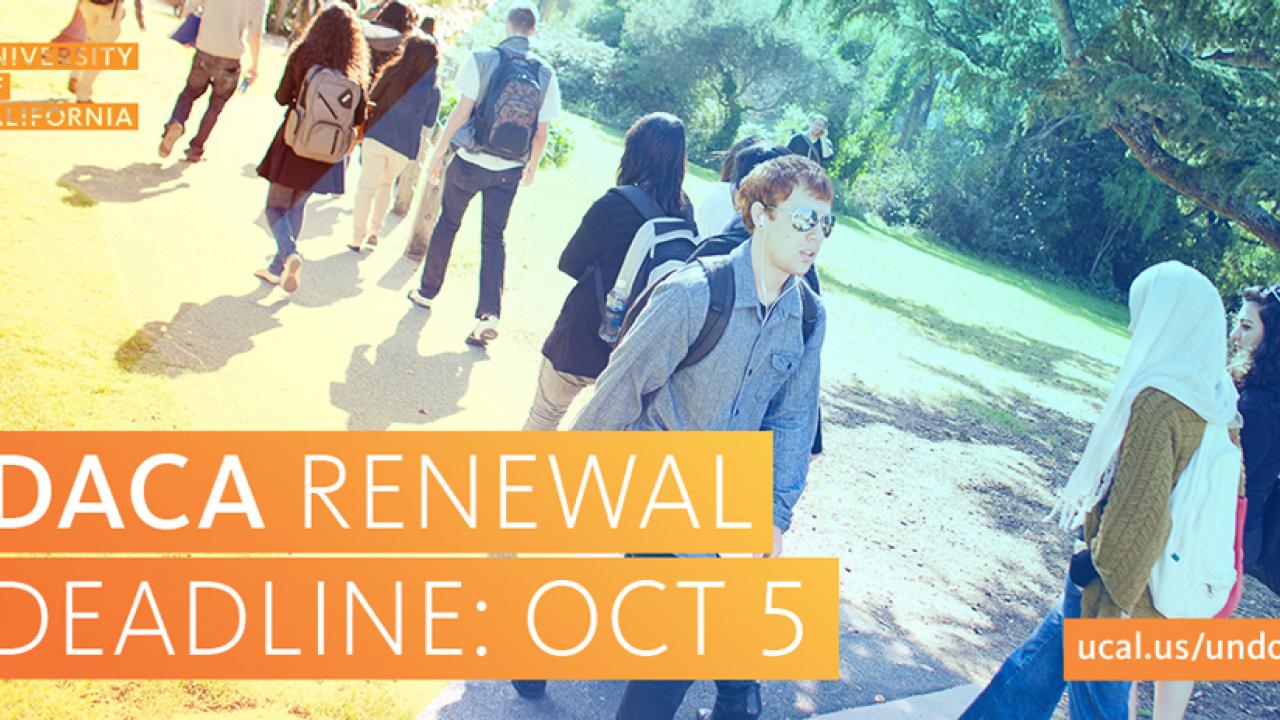 The Aggie DREAM Fund and a new source of funding are available to students to help them pay their renewal fees for the federal government’s Deferred Action for Childhood Arrivals (DACA) program. Renewal applications are due by Oct. 5, the deadline set by the Department of Homeland Security as it prepares to end DACA.

UC, the state of California and other states are suing the government to preserve DACA, but, in the meantime, UC President Janet Napolitano, Gary S. May and all of the other UC chancellors are urging eligible students to apply for renewal. They are eligible if their DACA status is set to expire by the program’s scheduled termination date of March 5; the two-year renewals would remain in effect even after that date.

“Thanks to the generosity of our Aggie DREAM Fund donors and the Mission Asset Fund, UC Davis students who are eligible to renew DACA should not worry about how to pay the $495 renewal fees,” said Andrea Gaytan, director of the AB540 and Undocumented Student Center.

Make a donation to the Aggie DREAM Fund.

The Mission Asset Fund announced today (Sept. 13) that it will provide $500,000 in scholarship funding to pay DACA renewal fees for UC, California State University and California Community College students. The fund is providing $1 million nationwide to pay DACA renewal fees. The application process starts here, on a website that includes a countdown clock to the renewal deadline.

José Quiñonez ’94, of the Mission Asset Fund, has a connection with Andrea Gaytan ’90, who helps Dreamers through the AB540 and Undocumented Center. They were among four students who staged a six-day hunger strike in May 1990 — an action that led to the creation of the Cross Cultural Center.

“We were shocked and horrified to learn that President Trump ended DACA,” Quiñonez said. “We sprang into action once we saw a small window of opportunity to help thousands of Dreamers to renew their protective status. The time to help these young people is now.”

As time is of the essence, the online scholarships will be processed within a day, with same-day checks available in San Francisco and by overnight mail in other parts of the country, according to the Mission Asset Fund’s statement.

In a Sept. 12 letter to the UC community, Napolitano and the UC chancellors said: “Even if DACA is phased out permanently on March 5, 2018, applying for a renewal no later than Oct. 5, 2017, is the best opportunity to obtain two more years of protection against deportation and legal authorization to work.

“With fewer than 30 days before this deadline, we encourage everyone whose DACA permit expires in the next six months (by March 5) to act quickly. And please share this renewal application deadline with others who could benefit.”