News
This article is the second in a series that will discuss Sacramento’s hotter future, and what we can do now to be ready for it.

At 6:30 a.m. on a September morning in Phoenix, when you walk outside with your morning coffee, the day is already hot. Like 90 degrees hot.

Throughout the summer and into early fall, temperatures are rarely below 90 in the city, even at night. By summer’s end, people are throwing blocks of ice into their swimming pools so it feels less like bath water. In this place, car windows are tinted; exercise happens inside or at night; and blinds, curtains and windows remain shut during the day to keep out the heat. And that’s for the people with homes.

“I call it Hot Land,” said Phoenix resident and community health advocate Stacey Champion. “It’s really like living in an oven for part of the year. We are in a place where air conditioning is not a luxury — it’s literally a matter of life and death.”

Phoenix hasn’t cracked the code of how to live with extreme heat. Since May, heat has contributed to the deaths of at least 55 people in Maricopa County, where Phoenix sits. Heat-related deaths across Arizona tripled between 2014 and 2017, from 76 deaths to 235. Most of those deaths were in Phoenix.

The city has become a testing ground for living with extreme heat. How Phoenix handles heat holds lessons for other warming cities like Sacramento, where both temperatures and populations are increasing.

By 2100, according to the 2018 Sacramento Valley Climate Change Assessment, the number of days that midtown Sacramento is expected to experience temperatures topping 104 degrees is expected to grow from four days per year to 40. That is similar to what Tucson experiences now and about half of what Phoenix deals with already.

This summer, about 70 days topped that 104-degree threshold in Phoenix, and nearly every day since May was above 100. If those of us in Sacramento are concerned for our hotter future, consider that Phoenix, according to Climate Central modeling, is projected to resemble the 114-degree averages found currently in Kuwait by 2100.

From her office in Sacramento, Helene Margolis, an associate adjunct professor in the UC Davis Department of Internal Medicine, wants to be clear: “We’re here now. There’s a misconception that there has to be a ‘heat wave’ and extreme temperatures for there to be adverse health effects. But you don’t need 120-degree temperatures to have a huge public health impact.”

Margolis witnessed that firsthand in 2006 when a summer heat wave swept over most of California for an unprecedented two weeks, breaking temperature records throughout the state. She was working at the state Department of Public Health. One of her job tasks was to field calls. Some were from the coroner’s office. Heat killed at least 600 people that summer and thousands of animals.

“People were driving along Highway 99 and I-5, passing feedlots and watching the cattle die,” Margolis said. “People’s hearts will break for animals and children. They were asking, ‘What should we do?’ No one was prepared for an event of this magnitude.”

Margolis co-authored a study led by Kim Knowlton of the Natural Resources Defense Counsel and Columbia University showing that the heat wave brought on about 1,200 additional hospitalizations statewide and 16,000 extra visits to the emergency room. Even in relatively cool San Francisco, temperatures as low as the 80s were unseasonably warm enough to increase ER visits and heat-related illnesses. 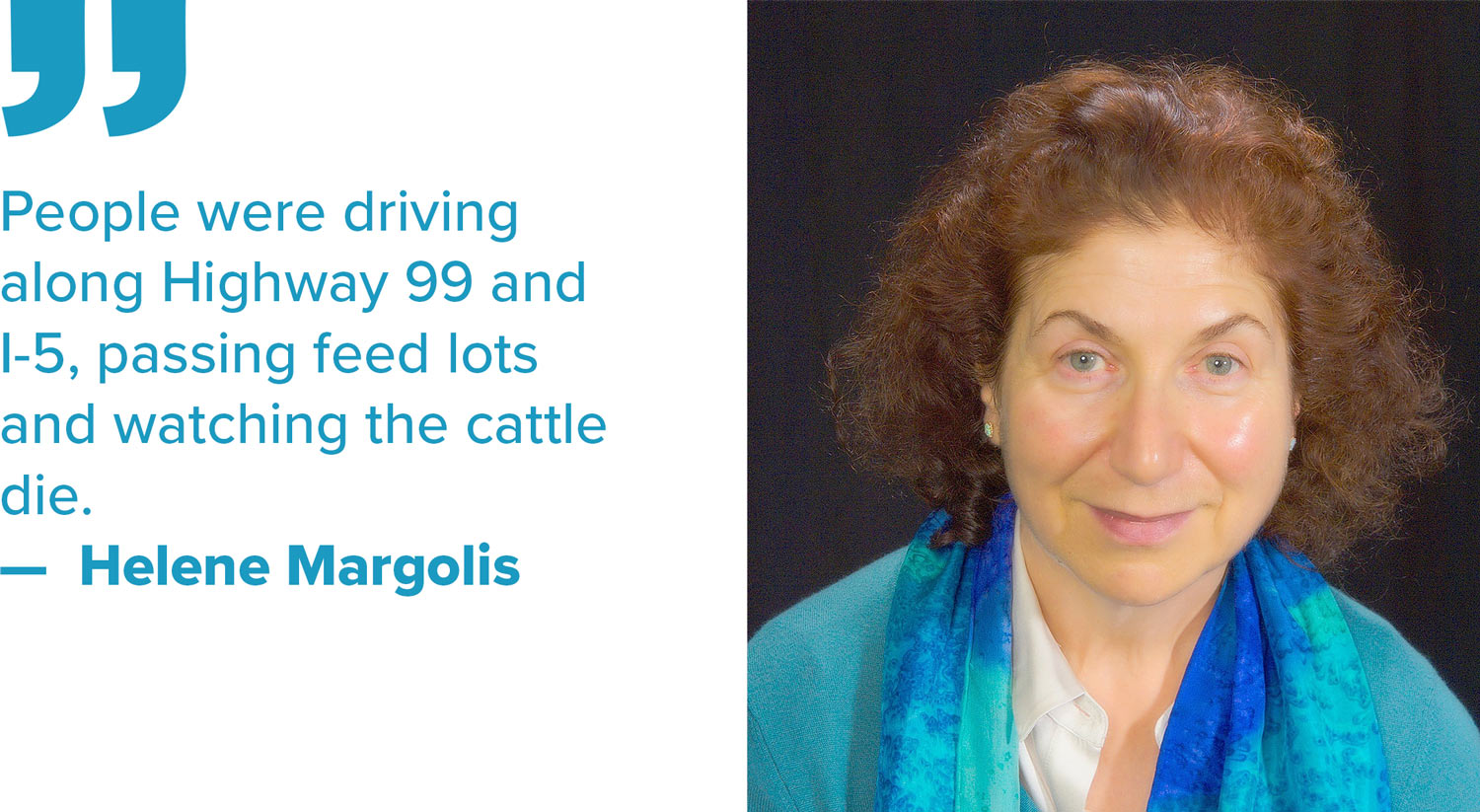 As California was reeling from its heat wave, Arizona was in the middle of a major spike in heat-related deaths, as well, jumping from 42 deaths in 2004 to 85 in 2006.

“We didn’t even have a program for heat surveillance at that time,” said Vjollca Berisha, an epidemiologist with the Maricopa County Department of Public Health. “We were sort of starting from scratch.”

They knew that to manage a problem, it had to be measured. The county became the first in the nation to develop a heat surveillance program. They work with medical and coroners’ offices to track and classify deaths. From May through October, the county posts weekly numbers of heat-related deaths on its website. They collect information such as whether the deceased had been using an air conditioner. This data helps determine which communities and demographics are being most affected.

Kate Goodin of the Maricopa County Department of Public Health said they haven’t been able to pinpoint a reason for these dips and spikes. One theory is people were saturated by public health messages and were on high alert after the 2005 heat wave but may have become more desensitized in recent years.

“Every summer is different,” said Kathryn Conlon, who specializes in climate adaptation health with UC Davis Health and the School of Veterinary Medicine. “When we think we’ve identified a vulnerable population, there’s evidence there may be another. We have to share our experiences as public health practitioners. Surveilling alone doesn’t tell you how to intervene, but it tells you where you might be able to.”

Sacramento County just began to analyze heat surveillance data in the past few months using a program originally used to track flu in the region and, last year, wildfire smoke. 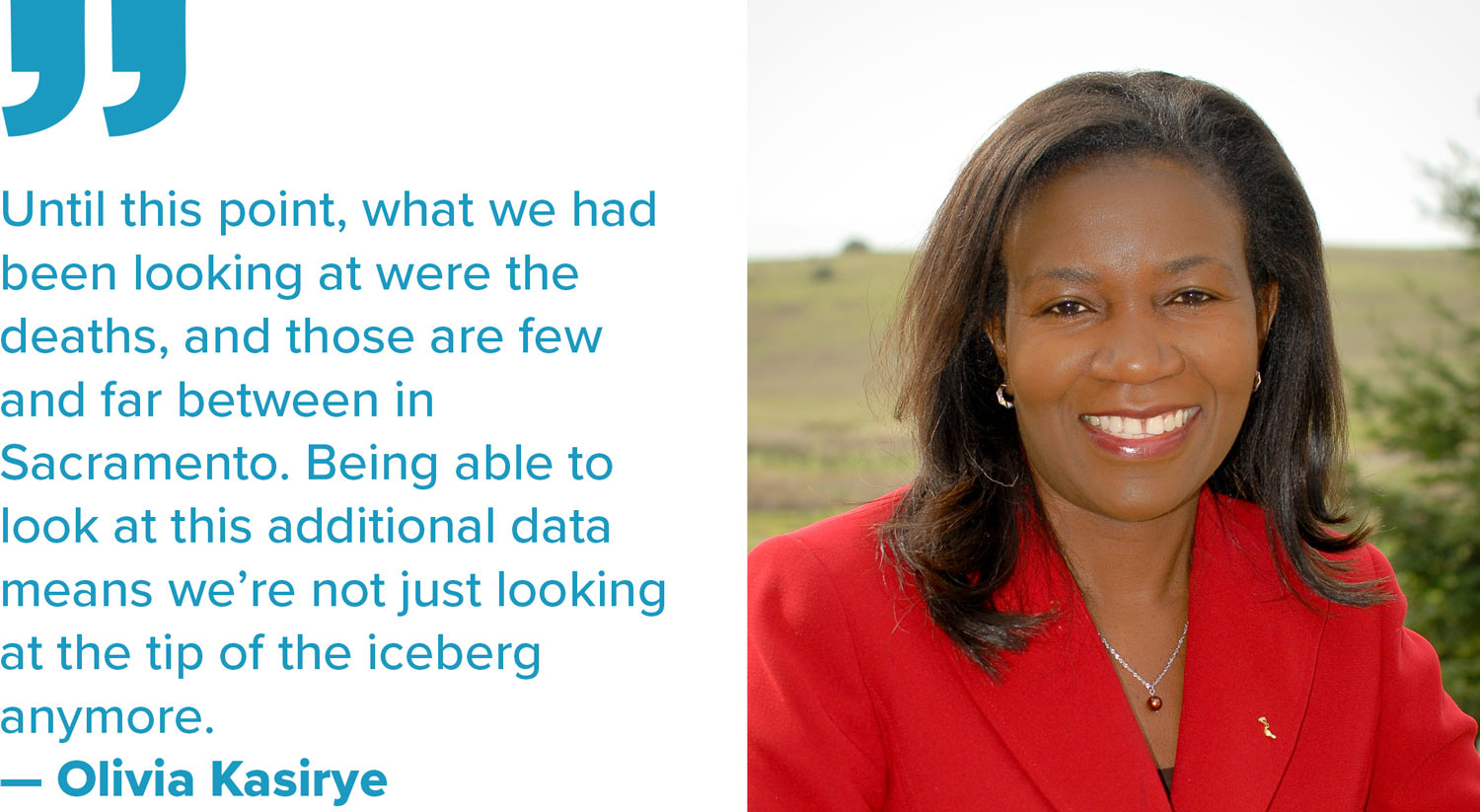 During heat events, the system tracks emergency room visits and heat-related illnesses, ambulance calls, and where they come from. It compares daily air quality and temperatures and provides demographics about who is being most affected. For instance, it identified, unexpectedly, that most 911 calls during heat waves are coming from active young adults that become dehydrated. That kind of information can help shape public health messages.

“Until this point, what we had been looking at were the deaths, and those are few and far between in Sacramento,” Kasirye said. “Being able to look at this additional data means we’re not just looking at the tip of the iceberg anymore.”

Who is dying from heat in Phoenix?

As Maricopa County dug deeper into its heat surveillance data, surprising trends began to emerge. They initially expected the vast majority of deaths to occur outdoors, with the very young and very old being most at risk. They found that:

An unsurprising finding? People already impacted by social, environmental and health disparities experience the worst impacts related to climate change and extreme heat, although no one is immune to them. In other words, the vulnerable are the most vulnerable.

“The people vulnerable when it’s hot are vulnerable because of what we haven’t done when the temperature is not extreme,” said Flojaune Cofer, senior director of policy at Public Health Advocates, a Sacramento-based nonprofit. 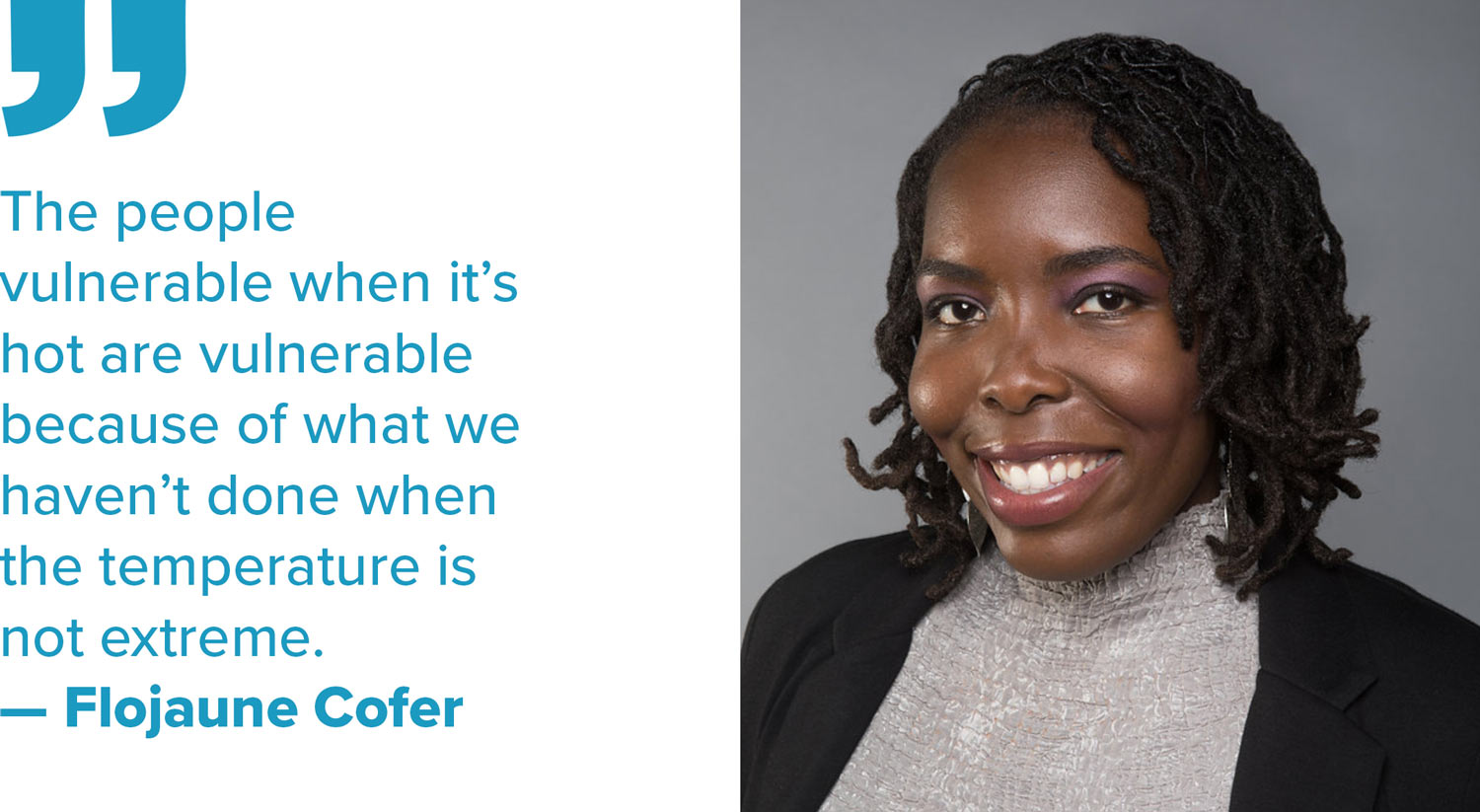 While extreme heat and smoke events affect everyone, Cofer notes that the unhoused population has nowhere to go. Homeless people in Sacramento are chronically dehydrated, due in part to a lack of public bathrooms. The more they drink, the more they have to look for a facility that rarely exists for them.

“We have to think about heating and cooling as a social justice issue,” Cofer said.

Cooling centers are one tool cities use to help heat-vulnerable populations. These air-conditioned facilities are often places like libraries, senior centers and community centers that people can use during heat waves to cool down.

Maricopa County has dozens of cooling stations and hydration stations, which are highlighted on a Heat Relief Regional Network Map.

Sacramento opens its handful of cooling stations when the forecast calls for highs above 105 degrees for three consecutive days and lows above 75 degrees. The county said it may revisit that threshold, given the heat strain multiple days in the lower 100s can bring. But few people tend to use the centers, reducing the incentive to spend the resources to open them more often.

Researchers and public health advocates in both cities point out several shortcomings to cooling centers that, if overcome, may help them become more effective:

“By building social cohesion, we can advance mental and physical health, while at the same time increasing resilience to the challenges posed by climate disruption,” she said. “My fantasy is that every neighborhood, regardless of its socioeconomics, has a community center with state-of-the-art ventilation, a community garden, and activities for seniors and youth. These become places where people go to visit each other, not under crisis. Then, during an environmental crisis, be it heat or smoke or flooding, people are comfortable going there.”

Many states across the nation have laws that prohibit utilities from shutting power off to people when temperatures drop below freezing.

In a city that lives and dies by air conditioning, Stacey Champion is fighting for a similar law to be in place for extreme heat in Arizona. Last year the bill did not receive a committee hearing, but Champion said she plans to work to bring a revised version back.

“Coming from Minnesota, I think a lot of cold-weather state people assume those policies exist,” Champion said. “When I started digging, we didn’t have anything like that, or what was there was practically worthless.” 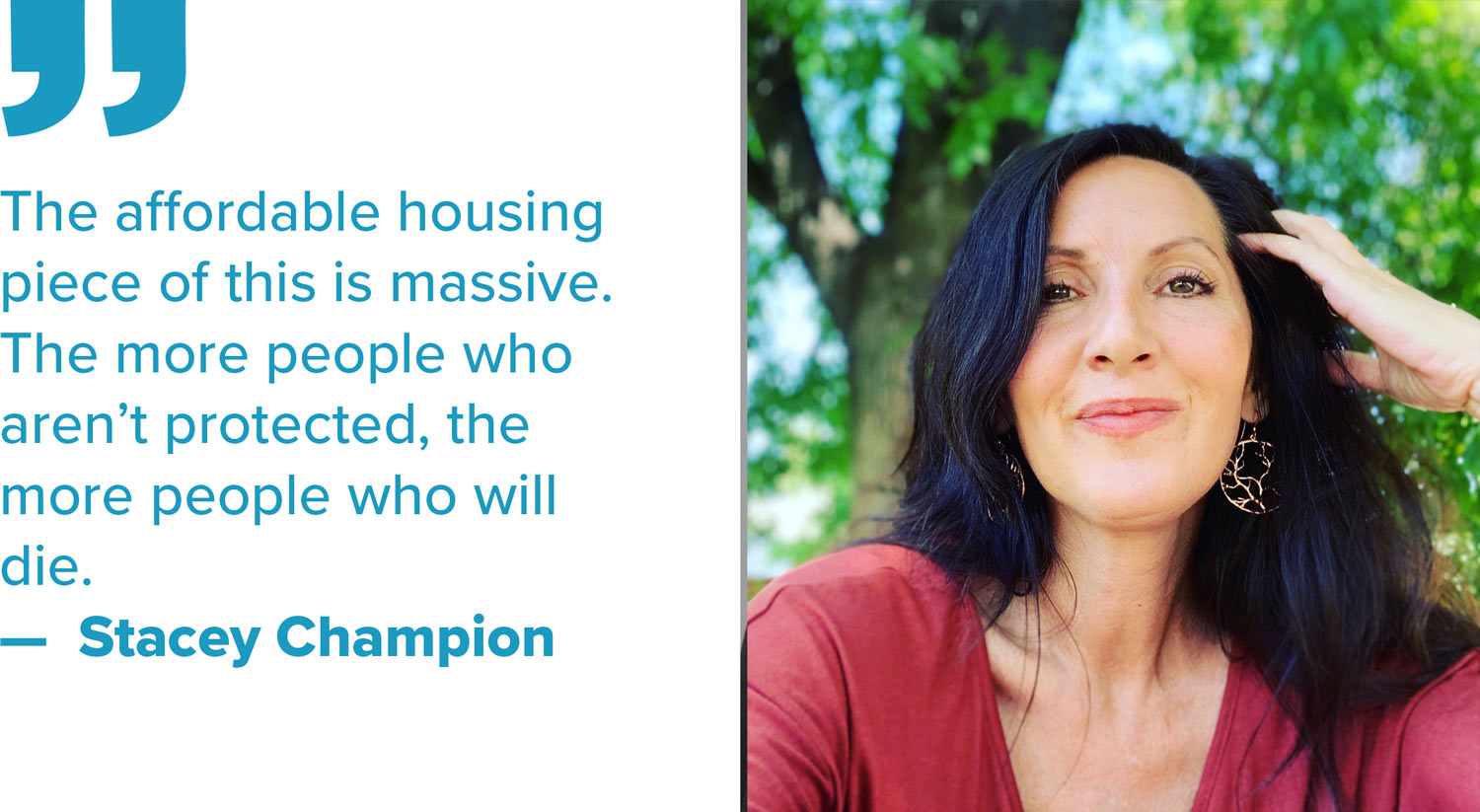 Currently, some Arizona utilities and energy assistance programs will work with consumers to avoid shutting off their power when temperatures are especially hot. But the policies differ among utilities under varying criteria, such as age and health.

However the law plays out in Phoenix, it’s an issue warming cities are wise to consider, especially in places already facing affordable housing and homelessness issues.

For Sacramento to adapt and thrive in a warmer future, collaboration among agencies, institutions, jurisdictions and communities is vital to ensure that solutions are interwoven through all facets of life. As unexciting as that may sound, it could save lives and create resilient communities.

Nearly every person from Sacramento interviewed for this story mentioned a key group attempting to do this: the Capital Region Climate Readiness Collaborative. More to come in this series on their work and some solutions being proposed.

But the effort points to a rising awareness and regional discussion that climate change is a public health issue and a social justice issue — one that moves beyond hydration and air conditioning to how we build, plan, travel, educate, make policy, pave roads, paint roofs, treat each other, and foster equitable, sustainable communities.

“The longer we wait, the less opportunity we’ll have to address these issues,” Cofer said. “But some positive things are happening now.”

So let’s recap some of the lessons from Phoenix: They track, they use cooling centers and hydration stations, they are looking at ways to keep power on during the hottest days for people who can’t afford it. And they, like Sacramento, are reaching across sectors to integrate solutions.

Read the rest of the Becoming Arizona Series: