How is Japanese American History Being Preserved?

A recent podcast episode by Sidebar, produced by Courthouse News, featured Gabriel (Jack) Chin, professor of law at the University of California, Davis, School of Law. The podcast discussed the history of Amache, a World War II Japanese internment camp, as well as the steps Japanese Americans are taking to preserve their history.

Three months after Pearl Harbor, on Feb. 19, 1942, President Franklin Delano Roosevelt signed Executive Order 9066, sanctioning the removal of more than 110,000 Japanese Americans and immigrants from the West Coast. The U.S. government incarcerated them at 10 prison camps across the West, including the Grenada Relocation Center in Southeast Colorado, commonly called Amache.

From August 1942 to the camp's closure in October 1945, Amache detained 10,000 people. The population remained around 7,500 at any time. Nearly a quarter of the inmates were children. Ten percent ultimately enlisted in the Army, and none of them had committed a crime. On the dusty, desolate Eastern plain of Colorado amid extreme heat, cold and wind, the people incarcerated at Amache built their own town complete with a fire department, a beauty salon and schools.

“A lot of the issei, or first-generation people that were in camp, our mothers and fathers and grandfathers, they had a habit of not talking about camp,” said Ken Kiajima, a 92-year-old survivor of Amache. “They didn't like it. And, they had a Japanese saying for that: shikata ga nai. ‘Oh, it can't be helped.’ So, the young people, we were left out of any questions and so forth they wouldn't answer. Almost all Japanese families in that first generation have that attitude, it's a Japanese characteristic: it means it can't be helped so let it go, don't fight it, so they just went along with it. Those are kind of bad memories. “

Chin commented on the impact of the decades old Korematsu Supreme Court decision on modern day immigration politics and priorities. Korematsu v. United States was a landmark decision by the U.S. Supreme Court to uphold the exclusion of Japanese Americans from the West Coast Military Area during World War II. Korematsu resurfaced in 2018, when the Supreme Court heard arguments on the Trump administration's travel ban against Muslim majority countries. Up and down the campaign trail, Trump promised to ban Muslim immigrants and then penned an executive order that did exactly that, without the heated political rhetoric. 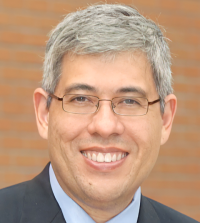 “I think Korematsu was overturned in Trump vs. Hawaii” said Chin. “They said we're overruling, okay, and I think that's great. I'm glad they overruled it, but they reveal themselves in what they do, so, they say racial classifications are suspect and subject to the most exacting scrutiny, the most rigid scrutiny, alright. But then they uphold the ‘Muslim Ban.’ So, obviously it's not a very rigorous test.”

“The key document in my view is the 1790 Naturalization Act, and I bought a copy of it on eBay 20 years ago from an old newspaper. It was signed by George Washington as president, John Adams as vice president and Thomas Jefferson as secretary of state, and it limits the privilege of naturalization to free white persons. This racial restriction remained in effect until 1952 in one way or another. You know, the founders of the country signed it in 1790, which was the first Congress  — they're starting the basic framework of the government. And one of the first things that they do is say free white persons is who we want to make citizens.”

“So, we don't have racial discrimination in immigration anymore, other than by application, other than in discriminatory enforcement. But the law itself is race neutral and the law itself has largely race neutral results. There's no racial restriction on who can become a citizen in means of segregation. So, I think there was a lot of racial discrimination, racism as an attitude was in the sinews of the country. But then we changed the law and I think the attitudes have changed a lot too. I think it takes a long time for culture to change."

"And I don't think that racism against non-white racial groups has dissipated, but I think in 2022, we're talking about something different than we were talking about in 1954 or 1965."

“But I also think that these attitudes are there in many people, consciously or subconsciously, as with the Wuhan flu, China virus, comes out under pressure, economic pressure, social pressure, like the pandemic, in some people it’s still there.”

Academic researchers and students have worked with the survivors to uncover and preserve their history. Their work was recognized nationally this year, with Amache becoming the newest national park this past March.

“You know, this history was in the shadows for so long, and having it be a park really is an honor to the people who were there” said Bonnie J. Clark, professor of anthropology at the University of Denver. “And, whether for, you know, the sort of dwindling number of survivors or for their descendants and I think, especially when I hear the descendants talk about it becoming a park, they just get so choked up about the honoring of their parents. It's amazing. It's what we would all hope for our sites. You know, I can rest assured that at some point I'll be able to stop spending every other summer at Amache and it's gonna be okay.