The Conversation: Would Gas Tax Breaks Make a Big Difference When Prices Are Skyrocketing? 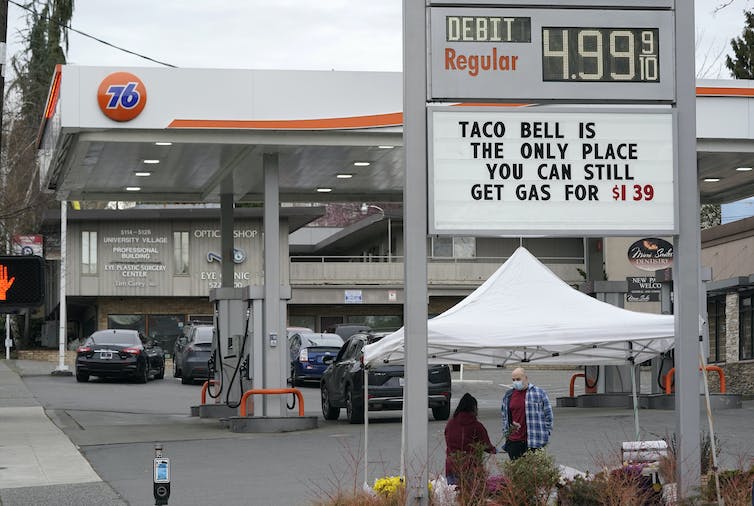 This article is republished from The Conversation under a Creative Commons license. Read the original article.

With gasoline prices trending over US$4 per gallon nationwide, politicians are feeling the heat. In response, Maryland and Georgia have temporarily waived their state gasoline taxes to reduce the burden on consumers. Other states are considering similar actions, and some members of Congress have called for suspending the federal gas tax. The Conversation asked four experts whether gas tax waivers are an effective way to provide economic relief to U.S. households, and what other impacts these measures could have.

As an economist who has studied gasoline prices, I doubt that waiving gas taxes will meaningfully lower prices at the pump. Russia’s invasion of Ukraine boosted gasoline prices dramatically, and politicians feel a need to show voters they are doing something. Cutting gas taxes makes great political theater, but as a few numbers show, it is an ineffective policy.

According to the American Automobile Association, the average price of gasoline in Maryland just before the state’s gas tax holiday was $4.25 per gallon. Two days after the state stopped charging the gas tax, prices were $3.81. A 44-cent drop may look significant, but it’s not that simple.

First, not all of that decrease happened because of eliminating the gas tax. Neither Delaware nor the District of Columbia, both of which border Maryland, had waived their gas taxes. However, over the same time period, Delaware gas prices declined by 19 cents per gallon and D.C. prices fell by almost 16 cents. These drops are partly due to falling oil prices. Florida, which is far from Maryland, saw a 16-cent drop per gallon over this same time period.

The latest U.S. government statistics show that Maryland consumes 4.5 million gallons of gasoline per day. That sounds like a lot, but Maryland has 6 million people. That means the average person consumes about 22 gallons per month. Doing the math, we find that cutting gasoline prices by 44 cents per gallon saves the average person in Maryland about $10 monthly – the price of an average cheese pizza.

Federal highway maintenance is primarily paid for with gas tax revenues that flow into the Highway Trust Fund. The federal levy of 18.4 cents per gallon, unchanged for almost 30 years, is a major component of these revenues, along with taxes on diesel fuel, gasohol, methanol, liquefied gases and compressed natural gas.

The federal government collects roughly $37 billion to $38 billion per year in revenues from the gas tax. These revenues have remained fairly consistent over the past five years, even through the heart of the pandemic. Other highway-related fines and fees also go into the Highway Trust Fund, but their magnitude is comparatively small.

But if the government collected $38 billion in gas taxes, where did the other $8 billion come from? Since most politicians strongly resist raising gas taxes, even to pay for much-needed repairs, the government has turned to less transparent alternatives.

Several times in the past decade, officials have shored up the balance in the Highway Trust Fund with intragovernmental transfers from other accounts. Most recently, the Fund received $10 billion this way in October 2020 and $90 billion in December 2021. That represents $100 billion that was not spent providing other services.

If the Highway Trust Fund faces more shortfalls, program managers will either greenlight fewer infrastructure maintenance projects or transfer money from other programs. This would be the most likely outcome if Congress opts to suspend the federal gas tax.

Ultimately, taxpayers pay for everything that the government does. Policymakers simply decide how and when that will happen.

Americans drive far more today than they did 30 years ago, but highway construction funding hasn’t kept up.

First, not everyone benefits from a gas tax holiday. The very poor who lack cars, urban households who rely on public transit, and the elderly, who tend to drive less, benefit less from a tax holiday because they consume less gasoline. A gas tax holiday can soften the blow of high gasoline prices for commuters, but it provides little direct benefit to households that do not drive.

Second, even optimistic estimates suggest that gas tax holidays produce relatively modest savings for households. That’s because gasoline taxes are a small component of the price of gasoline in the U.S., especially relative to crude oil prices.

Even if savings from a waiver of the 18.4 cents-per-gallon federal gas tax were entirely passed on to consumers, a typical motorist who drives 10,000 miles per year in a 20 miles-per-gallon Ford F-150 would see about $7.70 in savings per month from a federal gas tax holiday. Drivers of more fuel-efficient vehicles would save even less.

Consider aid for heating and cooling

Millions of Americans face material hardship on a daily basis, and energy costs are a primary contributor. A gas tax waiver could temporarily help relieve people who have to rely on gasoline for transportation and who live in energy poverty.

Current gasoline price spikes are happening at an especially hard time for many households. The winter of 2021-2022 brought frigid temperatures in some regions of the country, and natural gas prices were high. In a recent study, colleagues and I found that 28% of all low-income households struggled to pay their energy bills this past winter, from November through January, and 38% carried debt on their utility accounts.

Now, with higher gasoline prices, filling a 12-gallon tank can cost about $51, up from about $26 in 2020. That increase may prevent households with limited budgets from covering all of their expenses, including basic needs such as food and health care.

Households with vulnerable members, such as small children or people with chronic health issues, are especially burdened by energy expenses than other groups. Temporary relief can be especially helpful for these consumers.

But a gas tax holiday may not be the most effective way to deliver that relief, especially since these waivers are temporary. Direct assistance to households for food and energy spending, or investments in weatherizing homes to reduce their heating and cooling bills, could provide larger and more lasting benefits.

[You’re smart and curious about the world. So are The Conversation’s authors and editors. You can read us daily by subscribing to our newsletter.]

Department of Economics College of Letters and Science