Weekend in your pocket

This weekend, and ongoing, you can see a bouquet of art in the region. Notably, the winner of a top prize at the UC Davis graduate art exhibition, among the many installations on view at the Manetti Shrem Museum of Art, and the local Pence Gallery, feature found objects in the art. Speaking of bouquets, catch those at the de Young — where they featuring actual flowers alongside painted ones. Enjoy your weekend, and a museum or gallery might be the ideal choice as the weather heats up.

UC Davis’ arts and humanities students were celebrated by their peers, professors, friends and families at the opening of the annual multidisciplinary showcase at the Manetti Shrem Museum on June 2.

Three students were awarded special honors. Professor Simon Sadler, chair of the Department of Design, presented The Savageau Award to Trace Manuel. The award’s purpose is to further the career of a design M.F.A. graduate from UC Davis, and to encourage, recognize and celebrate creative and original contributions to the discipline of design.

The Keister & Allen Art Purchase Prize went to Morgan Cristine Flores. Awarded annually to an art studio Master of Fine Arts student, the prize comes from an endowment fund established by Shaun Keister, vice chancellor of the Office of Development and Alumni Relations, and Walter Allen, of Information & Education Technology at UC Davis.

A third prize, the inaugural LeShelle & Gary May Art Purchase Prize, was awarded to Kelley O’Leary. The new May Art Purchase Prize is made possible through the generosity of Suzanne Hellmuth and Jock M. Reynolds M.F.A. ‘72 and joins the Keister & Allen purchase prize in enabling the museum to continue the tradition of purchasing graduate student work for the university’s Fine Arts Collection and building an endowment to eventually acquire a work from every graduating M.F.A. student.

Her thesis records her journey of visiting the “Cloud” — data centers in the deserts of the American West. She collected materials from different cloud storage center locations. Rocks, clay and dirt are labeled in the alcove in the photo, and the ceramic pieces are made from materials she gathered.

Arts & Humanities 2022 Graduate Exhibition is on view at the Jan Shrem and Maria Manetti Shrem Museum of Art through June 19.

More on the exhibits and students participating here. Hours for the museum, and more, here.

Verge Center for the Arts presents Immaculate Misconceptions, a career-spanning exhibition of work by the prolific and polymathic artist and inventor Pippa Garner. Interest in Garner’s work has been steadily increasing in recent years, and this exhibition seeks to provide context to her overall practice, life, and manner of playful social critique. Immaculate Misconceptions is organized by JOAN, Los Angeles.

Garner began her career studying car design at ArtCenter in Pasadena in the 1960s. She was living at that time as Phil Garner before transitioning to Pippa Garner in the late 1980s and early 90s. The 1960s era was the era of the muscle car, and she spoofed these macho machines and their base aesthetics with a mad magazine style wit before expanding her critique to domestic home goods. With an absurdist, arch humor she both predicted and satirized domestic trends, in her two self-published books Philip Garner’s The Better Living Catalog and Utopia — or Bust! Products for the Perfect World.

Many objects such as the Electrolux Having a Smoke, a retro Electrolux vacuum cleaner smoking a cigar, and the Genderometer, a desktop gadget with a dial that vacillates between masculine and feminine, were technical drawings of prototypes created now for the first time alongside this exhibition. Verge is also publishing Garner’s “Beauty 2000,” a previously unpublished manuscript from 1992 which playfully mocks trends in the beauty industry, suggesting new styles such as “pig burns,” men’s sideburns grown long enough to braid.

Accompanying the exhibition Verge is assisting in the production and completion of a documentary on Garner’s life titled PIPPA: Queen of the Future (2021). This documentary was co-produced by JOAN, Paralucent Pictures, Verge, and Tinker Tantrum Productions, and directed by Jeff Johnson and David Matorin.

JOAN is a Los Angeles-based nonprofit art space for exhibitions, performances, and screenings. Founded in 2015 by three female curators, and inspired by the history of feminist performance spaces, JOAN supports experimental practices that exist outside of commercial contexts. Over the past seven years, JOAN has presented work by over 130 artists, the large majority of whom identify as women, non-binary, or as members of the LGBTQ+ community, often supporting them in their production of larger-scale projects at key points in their careers. JOAN aims to enrich the communities we serve with free, public programming that is intellectually stimulating and that has creative, cultural and educational value.

Verge Center for the Arts is located at 625 S St., Sacramento

Artists from the Sacramento region to the Bay Area have been drawn to the practice of creating sculpture from found or recycled objects since the 1950s. Lifting a material or object into the realm of art can stimulate a vast network of associations, from the personal to the political. Found includes recent assemblages by Jim Adan, Suzanne Adan, Randy Brennan, Nathan Cordero, Julia Couzens, Ianna Frisby, Stephen Giannetti, Nemo Gould, Cherie Hacker, Ron Peetz, Terry Peterson, Cami Rothmuller, Jill Allyn Stafford, Mike Stevens, and Carrie Ziser.

Natalie Nelson shares a short history of the practice of assemblage, or found object sculpture, followed by an exhibit tour by Found.

Plein air paintings and drawings created during the Garden Tour event by local artists are shared with the community in this small-scale display. Paintings by Karen Fess-Uecker, Kaye Gamper, Chris Kidd, Marlene Lee and Leslie duPratt, among others are included.

On view for just one week each year, the fundraiser features more than 100 floral displays designed by the Bay Area’s most innovative floral designers, in conversation with works from the deYoung's permanent collection.

Proceeds from Bouquets to Art help underwrite exhibitions, conservation projects, and education programs at the de Young and Legion of Honor.

For very accessible art, check out the bouquets at the flower cart June 9.

Purchase tickets for the many associated events here.

It is International LGBTQ+ month, and Davis is showing its pride with a festival, skate night, and run/walk June 11 and 12 in Davis’ Central Park.

Volunteers painted rainbow crosswalks around the Park, 301 C St., on May 29, in preparation for several pride activities, all produced by the Davis Phoenix Coalition.

Diva Disco Skate Night, starting at 7 to 9 p.m. on Saturday, June 11, under the Davis Farmers Market Pavilion. The night will include music, lights and food trucks.

Run/Walk for Equality, a 5K run or walk from the park, and a 1K Rainbow Run for youths ­– and those who prefer a shorter trek – on Sunday, June 12, beginning at 8 a.m. Register here.

Business owners are asked to show their support by hanging a rainbow flag poster in their window. Posters are free, and available by emailing admin@davisphoenixco.org.

The city of Davis is a sponsor of the Davis Pride Festival – awarding it money from its Arts and Cultural Affairs Fund. Throughout the month, the city has rainbow banners hanging from light posts around town, and flies the rainbow flag at Davis City Hall.

The Davis Phoenix Coalition, is a nonprofit working to foster diversity, eliminate intolerance, prevent hate-motivated violence and support LGBTQ+ youths. It was founded in the aftermath of a 2013 anti-gay attack on Davis resident “Mikey” Partida. Proceeds from Davis Pride support the coalition’s anti-racism and anti-bullying campaigns, support to LGBTQ+ youths and their families, and outreach with area police departments, churches and schools.

Boyd Gavin’s career as a painter is expressive and expansive. He has been able to work multiple subject matter, as well as challenge himself as a painter. There is a progress of his work that is subtle in change, but unique to his entire portfolio. Gavin’s work is filled with a color pallet that properly sets a mood and tone. The overlap of clear edges and mixed colors demonstrate the mastery of his paint brush.

“I compose feeling as much as I do color and line. In other words, the point is to work through feelings rather than towards it.”

At the age of 16, Boyd Gavin had his first show at the Crocker Museum. With his influence from the Bay Area Figurative Movement as well as others like Cezanne, Thiebaud, and Lucian Freud, Gavins has been able to transfer his energy from his portraits to his landscapes.

Gail Ritchie’s work is a reflective look on nature and the organic forms and shapes that nature can offer. Ritchie’s uses porcelain as a celebration of the environment and nature. Often using animals as a staple of her work, she also uses people intertwined with nature. Whether it is a bird perched on a chair that is overgrown by plants, or a child gleefully watching a frog leap into a pond, Gail Ritchie is able to make delicate sculptures out of porcelain.

Each time I complete a piece, I ask, ‘does it sing?’; on occasion, I can answer yes.

There is gentle wonder about Gail Ritchie’s work that is often hard to find in sculptures. The mix of porcelain and ceramic materials, colors, subject matter, and brightness, is what allows Gail’s work to stand out. She embraces the organic form to express a childlike curiosity. From animals to plants to people, Gail Ritchie’s work always is of the highest quality. Text courtesy of the gallery. 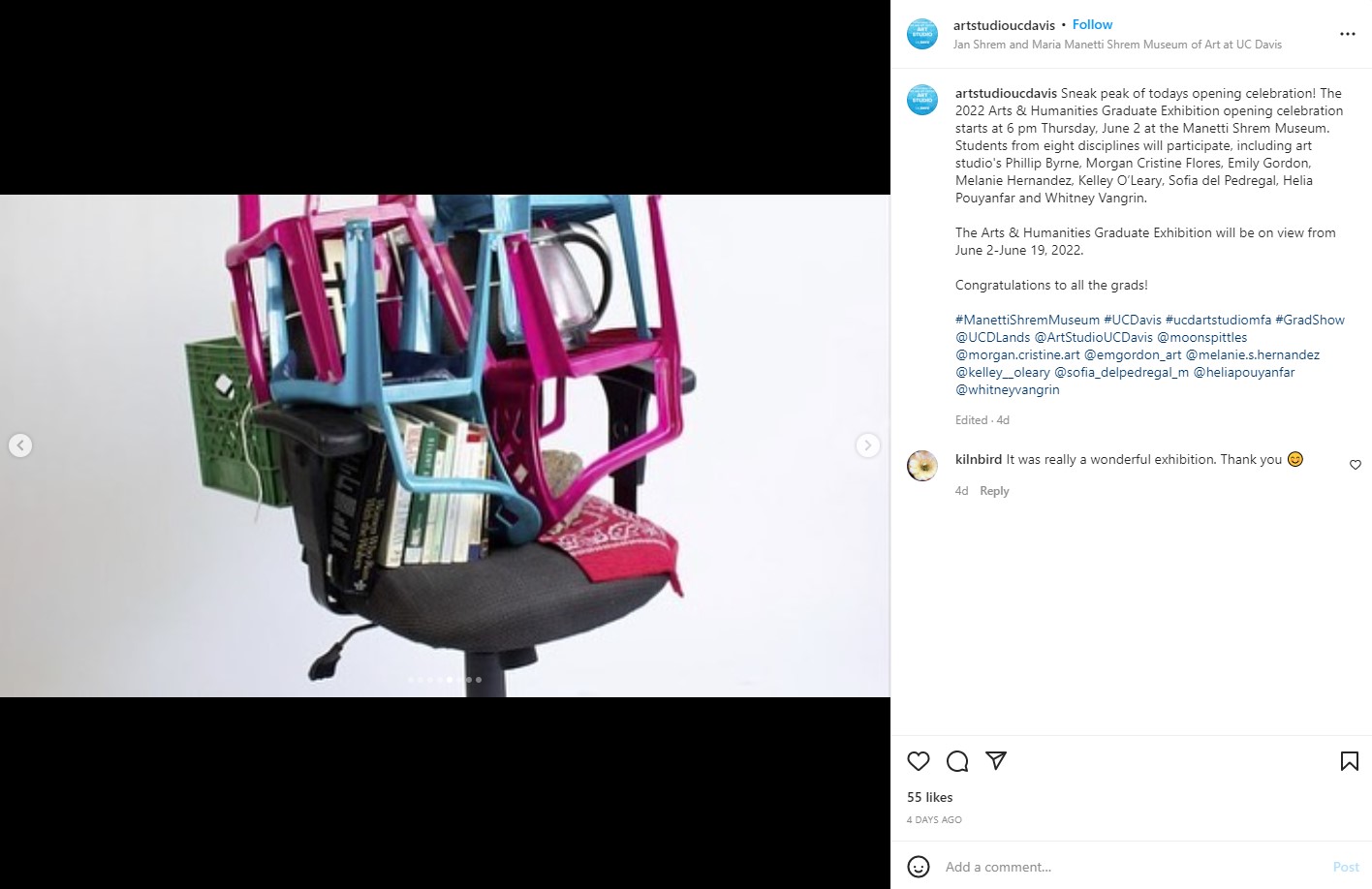