Weekender: Enjoy Monet at Crocker and Look to Other Local Attractions

This week, as we close in on a lot of time off for many readers, and UC Davis virtually closes for the holidays, we encourage you to think about visiting and supporting local museums and plan to visit other art venues in the new year. And if you missed the Candy Store exhibition at Manetti Shrem this year, you can catch it in the new year at the Crocker Art Museum in Sacramento. Check out other local art openings here.

And come first of the year, sign up for your $10 well-being ticket for Circa, coming to Mondavi Center for the Performing Arts Jan. 28. Recommended only for ages 8 and up.

You won't miss another Mondavi performance if you happen to walk anywhere near the performing arts center on campus. It’s gone digital. Mondavi Center's 6-by-8-foot digital sign went live Dec. 10  just in time for that evening's performance by the Chamber Music Society of Lincoln Center.

Said Mondavi folks: “Big thanks to Herb Garman, director of operations at the Mondavi Center for overseeing the project from idea to inception; our partners at YESCO for their years of patience and reams of drawings; UC Davis Design and Construction Management for shepherding the project through dozens of changes; and our digital sign software provider REACH, who worked with YESCO to make the magic happen.”

Monet to Matisse at the Crocker

In the age of drastic change that created modern Paris, these artists re-examined their world and ways to depict it, creating new subjects and new perspectives, from plein-air landscapes to scenes of Parisians at leisure.

The first exhibition focused on French Impressionism to come to the Crocker Art Museum, Monet to Matisse: Masterworks of French Impressionism from the Dixon Gallery and Gardens provides a panorama of one of the most revolutionary movements in 19th-century art. With paintings by Claude Monet, Pierre Auguste Renoir, Alfred Sisley and others, the exhibition examines radical Impressionist innovations, which are still being felt even today. The exhibition also includes Impressionist precursors such as Camille Corot and Gustave Courbet, and features key Post-Impressionists and Modernists who followed, including Henri Matisse, Paul Gauguin, and Paul Cézanne.

The Swiss-born Modernist Paul Klee (1879–1940) was an artist and teacher whose work was influential for generations of practitioners. His compositions combined rhythmic patterns with studies of nature and the cosmos to capture what he called “a synthesis of outward sight and inner vision” that inspired artists including Lee Mullican (1919–1998), who first encountered Klee’s work at a memorial exhibition in 1942. Like Klee, Mullican sought “the opening of a new world, opening of the mind into a kind of cosmic thought . . . beyond what one saw, beyond form.”

This focused presentation brings together for the first time meditative works by Klee and early paintings by Mullican, created after he moved to San Francisco in 1947, that blend earthly and celestial imagery and explore the inner life of the visible universe.

Tauba Auerbach’s interdisciplinary work asks us to consider the ways that structure, pattern, and gesture function at intricate and vast scales. Often testing the boundaries of rational systems such as language, logic, geometry, and physics, Auerbach (b. 1981, San Francisco) is driven by a curiosity about where these established principles break down or become subjective. Undermining what the artist calls the “habituated gaze,” the work contends with questions of what and how we perceive, exploring the existence of multidimensional space and the resonant capacity of certain shapes and forms.

Auerbach studies these ideas by manipulating them in drawings, sculptures, and paintings, employing them in custom-built production tools, and incorporating them into objects that can be lived with or worn. A continual student of new and traditional craft technologies, including weaving, marbling, glass working, and 3-D printing, the artist has a longstanding relationship with hand-lettering and calligraphy.

Building a web of connections across time and media, this exhibition — Auerbach’s first museum survey — brings together 17 years of the New York-based artist’s artworks as well as designed and found objects, prototypes, reference materials, and open-edition publications produced and distributed by their imprint Diagonal Press. The title S v Z further embodies the close yet indeterminate relationship between form and meaning that surfaces throughout the artist’s practice.

The artist’s Auerglass Organ, created in collaboration with Cameron Mesirow (Glasser), will be performed throughout the run of the exhibition.

Jules Tavernier and the Elem Pomo at de Young

Upon its completion in 1878, Jules Tavernier’s Dance in a Subterranean Roundhouse at Clear Lake, California — which depicts a ceremonial dance (mfom Xe) of the Elem Pomo in an underground roundhouse (Xe-xwan) at Clear Lake (Xa’btin) — was hailed in a San Francisco newspaper as “by far the most remarkable picture ever painted on the Pacific Coast.” The French-born artist’s painting now returns to California for the first time in more than 140 years as the central focus of the Jules Tavernier and the Elem Pomo exhibition at the de Young. The exhibition includes more than a dozen paintings, watercolors, prints, and photographs by Jules Tavernier (1844–1889) and puts forth a new interpretation of his career masterwork and his other compositions of the Western United States by offering a multiplicity of voices and perspectives, including those of Pomo cultural leaders and curators.

Dance in a Subterranean Roundhouse at Clear Lake, California chronicles a cultural interaction on November 22, 1875, between California Indians in their homelands and outsiders associated with the Sulphur Bank Quicksilver Mining Company operating on Elem ancestral lands. In the ensuing years, the mine would cause widespread mercury contamination of the lake, with grave and long-lasting repercussions for the Elem community. In this exhibition, presented alongside Tavernier’s Dance in a Subterranean Roundhouse at Clear Lake, California and other major works are more than fifty historic and contemporary Pomo baskets and regalia pieces that celebrate the enduring artistry and resiliency of the Pomo artists over several generations and highlight their continued cultural presence in their homelands today.

To get a taste of it, the exhibition video is here.

Based on an illustrated children’s book by Lillian and Russell Hoban, “Emmet Otter’s Jug-Band Christmas” an hourlong TV special that first aired in America on HBO in 1978, will run Dec. 11-Jan. 2 at the New Victory, with streaming available Dec. 17-Jan. 2. Jordan Brownlee, who worked on puppets for the UC Davis production of "Peter and the Starcatcher" before graduating in 2020, is a puppeteer for the production.

The show starts off with the title character and his mother barely making ends meet by doing small jobs by the river in Frogtown Hollow. So when they hear of a talent show with a $50 cash prize, they separately decide to enter. Emmet plays the washtub bass in a group with his furry friends, and Ma sings, but they face stiff competition, especially from the naughty Riverbottom Nightmare Band, whose members include a stoat, a snake and a weasel.

“What I love about the show, and really appreciate more now that I’m older, is that it has so much heart,” said Christopher Gattelli, who is directing and wrote the book with Timothy Allen McDonald. “At the same time it has that great Muppet madcap wit, those zingers and those really fast takes, and those 30-second acts that are just hilarious. It’s like a ‘Muppet Show’ with a story.”

Singer-songwriter Paul Williams’s numbers for the original show offer an uncanny mélange of 1970s styles, with echoes of Randy Newman, Alice Cooper and the Carpenters. Except when the rollicking Nightmare Band pipes up, the music is filtered through a rootsy Americana vibe that transcends the decades, and was beautifully captured by My Morning Jacket in an aching cover of “Brothers in Our World” on the tribute “Muppets: The Green Album.”

For Williams, those creatures made the assignment feel effortless: He just got the show’s furry (or scaly, as the case may be) subjects.

“There are all these little touches in the script, amazing little clues to who the characters are,” he said. “My wife and I use the line all the time when the Riverbottom Nightmare Band has just been totally rude to all the guys in the tree house, and Charlie says, ‘They seem nice.’ It’s that human element that speaks to me,” he continued, “and it speaks to me at a level where it’s the easiest writing I ever get to do.”

Read the full article in the New York Times by  Elisabeth Vincentelli here.

Coming up next year

Circa is coming to Mondavi Jan. 28; well-being discount

Circa is the Mondavi student/staff/faculty well-being ticket in January. The show is Jan. 28. Read about the special $10 deal here. Tickets are on sale for all others here.

A symphony of acrobatics, sound and light, Humans 2.0 is next level circus by Circa.

Ten bodies appear in a flash of light. They move in harmony for a fleeting moment and then descend into a sinuous trance. Towers grow and decay, bodies leap and are caught, as physical limits are pushed to their extreme. Can we ever find a perfect balance or is adapting to constant change the only way forward?

This next chapter of Circa’s internationally acclaimed Humans is a tightly woven choreography of bodies, pulsing with music by composer Ori Lichtik and revealed in Paul Jackson’s dramatic lighting. Created by circus visionary Yaron Lifschitz, Humans 2.0 is intimate, primal and deeply engaged with the challenge of being human.

The Candy Store at the Crocker

Held on the occasion of what would be the 60th anniversary of the gallery’s founding — and in conjunction with a related show at the Jan Shrem and Maria Manetti Shrem Museum at UC Davis that was held earlier this year — this exhibition is the largest to date on the Candy Store.

In 1962, Adeliza McHugh opened The Candy Store Gallery in a modest house in Folsom, California. The business did, in fact, begin as a candy store, but when that closed, McHugh converted it into an art gallery. There were just two rooms for the ceramics, paintings, and other art she displayed, though these small spaces featured makers who would become nationally and even internationally significant. Many of these artists—including Robert Arneson, Roy De Forest, David Gilhooly, Irving Marcus, Gladys Nilsson, Jim Nutt, Jack Ogden, Sandra Shannonhouse, Peter VandenBerge, and Maija Peeples-Bright (née Zack) — either taught or were students at the University of California, Davis, or Sacramento State College (now California State University, Sacramento). Their work, along with that of many other artists, delighted visitors to the gallery for 30 years and helped put the whimsical, funky, and irreverent aesthetic of California’s Central Valley on the art-historical map.

The program will include Igor Stravinsky: L’Histoire du soldat (The Soldier’s Tale) presented as a suite of music, without dramatis personae.

Other works to be announced.

“Of California Ecology” will feature compositions inspired by nature in California, and will include new works by Julie Herndon, ensemble members, and Kian Ravaei—winner of Sl(e)ight Ensemble’s 2020 call for scores. 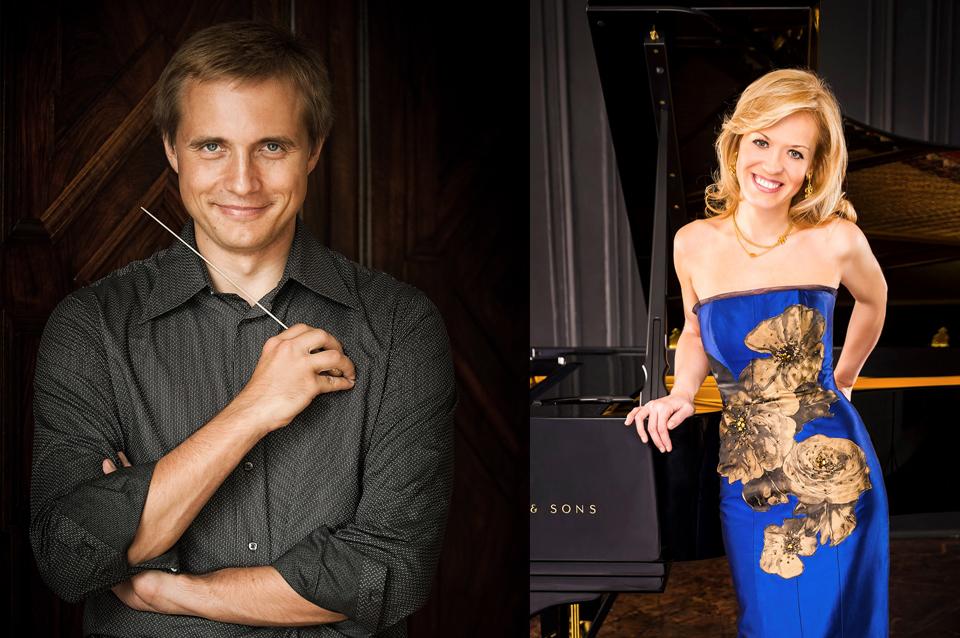 The Royal Phiharmonic is coming to Mondavi in January. (Courtesy art)

Social Media Of the Week 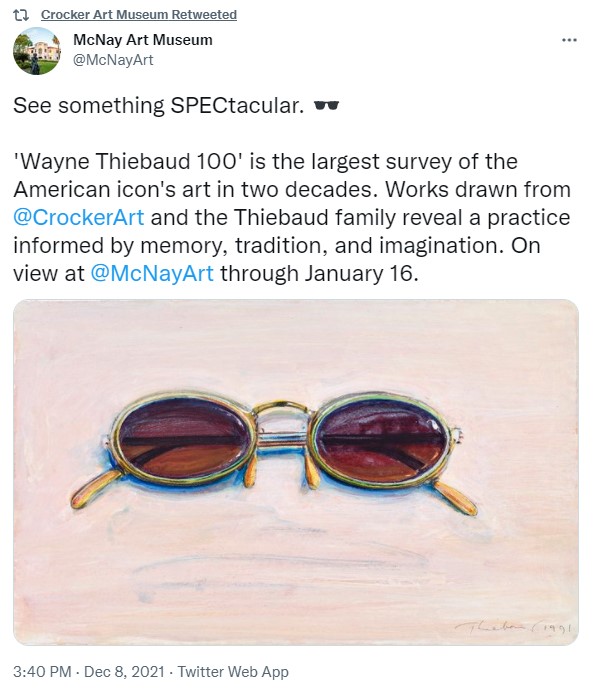