Arts Blog Has the Weekend in Your Pocket

Vincent Pacheco (UC Davis MFA ‘17) explores ancestral memories in a solo show titled Sup Foo. Pacheco presents an installation of hand-made piñatas. As a third-generation Mexican American caught between two worlds — an oppressed minority, and an upstanding citizen in white society — Pacheco uses this traditional craft to forge new cultural understanding. He embeds each piñata with familial memories, akin to a totem, and aims to forge new connections about his family's crime-ridden past, his fading knowledge of ancestry, and his place in the world. Find more information here.

Vincent Pacheco is an experiential artist living and working in the Tahoe National Forest of California. In 2010, he left his career as a graphic designer in corporate America in pursuit of spiritual knowledge rather than monetary gain. He purchased a cabin in the woods, began carving out a path dedicated to art making, and earned an MFA in Art Studio from UC Davis in 2017. Since then, he has shown work both nationally and internationally, and has recently completed artist residencies at MASS MoCA, and Verge Center for the Arts. Pacheco currently serves as an assistant professor of Applied Arts at Sierra College in Rocklin, and is a member of Axis Gallery in Sacramento.

Axis Gallery is an artist-run space located at 625 S St. in Sacramento housed in the Verge Center for the Arts Building. The Gallery provides artist living in the Sacramento region with an opportunity to be a part of an alternative exhibition space. By creating an environment which functions outside the usual commercial sphere, members are free to explore, create, and develop works that are not contingent upon sales.

Exhibit It! at Pence starts this week

The annual Exhibit It at the Pence celebrates artists in Davis and the surrounding communities. Exhibit It features both novice and experienced artists whose work reflects the community. The only restriction placed on the artist is the size of the work, hence the wide variety of themes.

Michael Kimmelman on the art and life of Wayne Thiebaud

Join New York Times architecture critic Michael Kimmelman for a heartwarming tribute to icon Wayne Thiebaud. Formerly The Times’ chief art critic, Kimmelman covered much of Thiebaud’s career, including the painter’s Times obituary last December. In this personal talk, the two-time Pulitzer Prize finalist will discuss the life and work of Thiebaud, whom Kimmelman described as, “the playful painter of the everyday.” Follow along as Kimmelman shares his experience writing about one of Sacramento’s most beloved sons. Kimmelman has reported from more than 40 countries and, based in Berlin, created the Abroad column where he covered cultural and political affairs across Europe and the Middle East. Purchase tickets here.

Classical Concerts at the Crocker

For more than 50 years, the Crocker has proudly presented its Classical Concert Series, featuring the finest musicians and singers from the region and around the world. These educational performances are approximately 60 minutes with no intermission and draw inspiration from art on view at the Museum. Enhance your Classical Concerts experience with a Prelude Tour.

Drawing inspiration from the Crocker’s permanent collection, with works ranging from the 17th to 20th centuries, Carlos Acotto brings a performance of technical proficiency that will sweep listeners away with a concert that is equally as expansive. Acotta begins with Three Argentinian Dances Op. 2 written by Alberto Ginastera, one of the leading Latin American composers of the 20th century. Working backwards through time, Acotta continues with selections from “Songs of Spain” by Isaac Albéniz, a Spanish virtuoso pianist and one of the foremost composers of the Post-Romantic era. The evening concludes with works by Franz Liszt, a prolific composer whose work anticipated 20th century ideas and trends.

To celebrate the 100th birthday of Sacramento’s most renowned artist, the Crocker Art Museum presented Wayne Thiebaud 100: Paintings, Prints, and Drawings, which was on view for only a short time due to the COVID-19 pandemic museum closures.

Now, following its national tour and then the death of the iconic artist in December, the exhibition is returning to the Crocker as Wayne Thiebaud: A Celebration. Thiebaud was UC Davis professor of art emeritus. An exhibit by his daughter is also at the museum.

The Music Man follows fast-talking traveling salesman Harold Hill as he cons the people of River City, Iowa into buying instruments and uniforms for a boys' band he vows to organize — this despite the fact he doesn't know a trombone from a treble clef. His plans to skip town with the cash are foiled when he falls for Marian the librarian, who transforms him into a respectable citizen by curtain's fall.

Davis Musical Theatre Company is a nonprofit organization whose mission is to conserve the Classic American Musical art form. DMTC will endeavor to produce quality, affordable, family-oriented theatrical musicals open to all people. With both a Main Stage and a Young Performers Theater, DMTC will strive to involve a multitude of people and families seeking to make a contribution toward the preservation of the musical theater art form.

Standup Of The Opera with Richard Stockton

The Woodland Opera House presents Standup Of The Opera with comedian Richard Stockton, along with rising comedy stars Emily Catalano and Faco! for a night of standup comedy, hilarious videos about Woodland, and music.

Racking up terrific reviews amid sold out houses, Richard Stockton’s standup comedy brings a positive perspective to a challenging world. He has appeared on dozens of national TV shows, produced and hosted the long running Planet Cruz Comedy Hour in Santa Cruz, and is author of the best-selling book, “Fondle The Fear.” Richard Stockton tells stories of unexpected outcomes, performed over his Delta-blues guitar.

Joining Richard is Emily Catalano, a Los Angeles-based comedian who recently made her late-night debut on Conan, with Conan O’Brien. She resists the advances of cheating men by never playing “Uno” with them.

Faco! Is from Gilroy, California, and is known as a hilarious cutting edge social commentator. This brilliant Latino comedian is host of Spontaneous Innuendos, a San Francisco based podcast.

A video spoof of Phantom of the Opera will open the show, in which the Standup Of The Opera writes the jokes for the show in the catacombs beneath The Woodland Opera House. Learn more about Richard Stockton on his website.

Art social media of the week 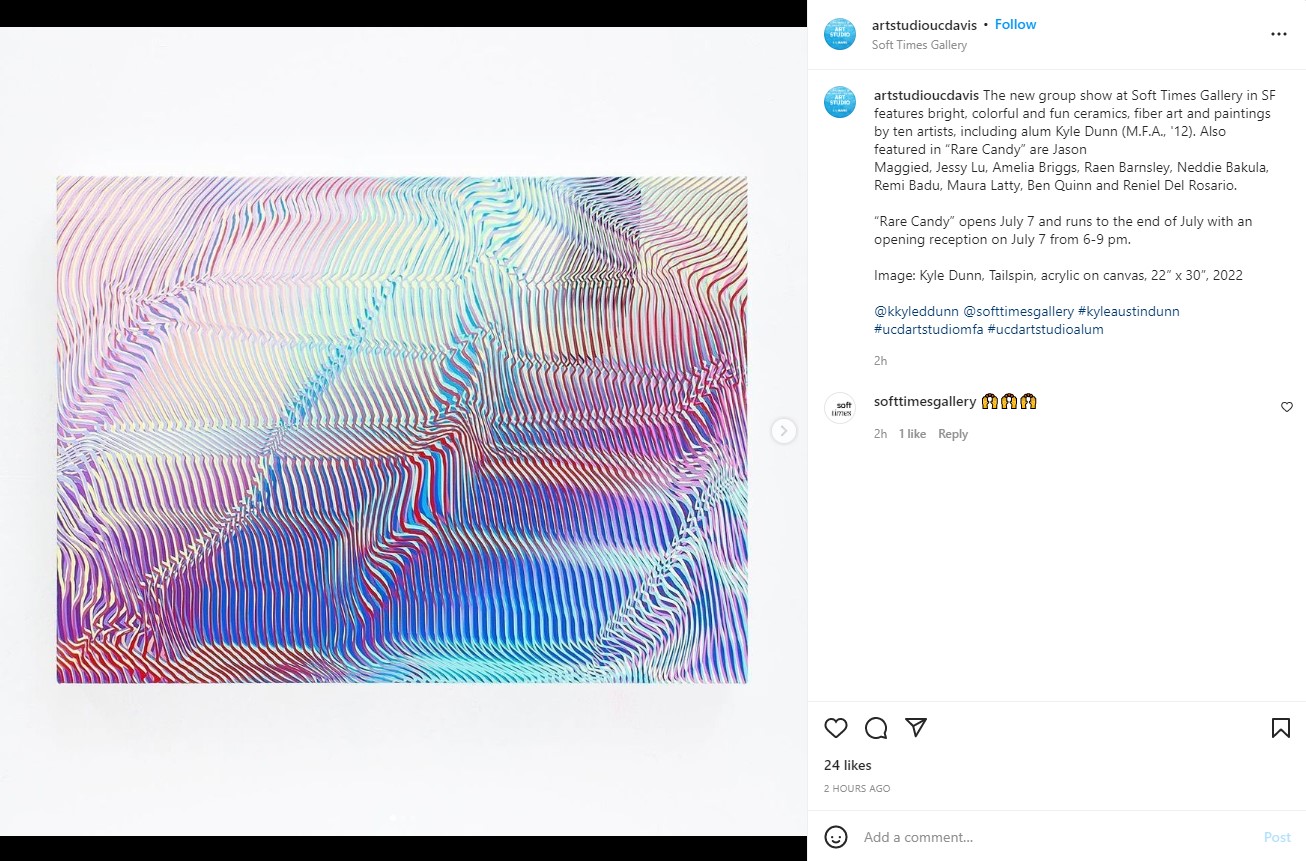