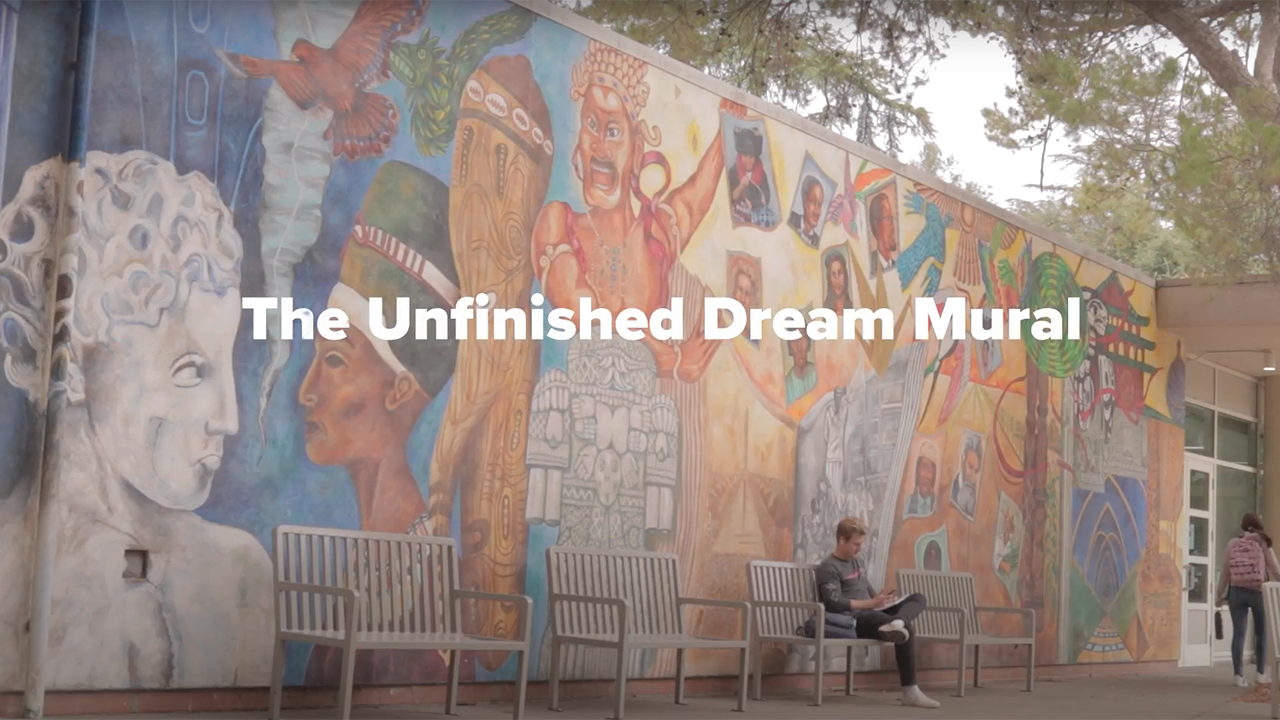 Ever notice the 20-foot-tall mural on the south side of the Memorial Union? You've likely walked past it on your way into or out of the building or, sitting at a picnic table in the south patio, you might have looked up from your work or lunch and wondered about the faces and figures depicted in it.

For most of 2021, when The Unfinished Dream mural turned 30, few people were on campus to wonder about or even notice it. Now that students are back, the time seems right for a belated anniversary celebration and—through hearing from the artists who painted it, students and administrators who participated in its creation and others—to take a look into its dramatic backstory, and why it remains surprisingly relevant today.

At the start of May 1990, around 200 students marched to Mrak Hall to protest what they perceived to be discriminatory practices in the Spanish department and to highlight the need for higher retention and recruitment rates among students from underrepresented communities. By the middle of the month, four students motivated by these and related concerns had launched a water-only hunger strike on the steps of Mrak Hall.

The strikers—José Quiñonez, Andrea Gaytan, Gopal Dayaneni and Ahmanal Dorsey—demanded three things: an official investigation into the alleged racism in the Spanish department; an increase in the number of full-time faculty members in the ethnic studies programs and the immediate establishment of an ethnic and cultural center on campus.

“The administration has been promising us each of our demands since 1960,” said Andrea Gaytan ’92, one of the four striking students, as quoted in a May 1990 issue of The Aggie. “We need action, not rhetoric.”

The strike—which began on May 14, 1990—lasted six days and concluded with an agreement between the students and university administration on a plan for adding ethnic studies faculty, a cross-cultural center and investigating concerns about discrimination in the Spanish department and elsewhere on campus. “I’m pleased that these issues, about which the students feel very deeply, have been clarified and that our planning for a cross-cultural center and for addressing racism is proceeding so well,” said then-chancellor Hullar in The Aggie.

While a mural wasn’t among the strikers’ stated demands, Gaytan noted that it had been a topic of discussion among student activists, as well as with administrators like Griselda Castro, a now-retired assistant vice chancellor in Student Affairs and career-long champion of art on campus. “But we figured by the time a public piece of art would be up for display, we would have starved to death,” said Gaytan, laughing. “And we wanted students to be able to give input.”

Before work on the mural could begin, artists Miranda Bergman and Kim Anno held a listening session with students to gather feedback on their initial design.

In May 1991, after about a year's planning, Anno and Bergman got to work on the mural. The four hunger strikers could walk by and watch it being painted, along with the rest of campus. Students from the Art department came out and helped with the work.

"We were creating something that was a container for a lot of dialogue,” said Anno. “And resolution of conflict, after coming out of the hunger strike … we were trying to figure out how to have a bridge to create a new world.”

Public art's power to embrace conflict and catharsis—as well as community aspirations, was on the minds of artists Miranda Bergman and Kim Anno when they visited the UC Davis campus in late summer 2021 to see the mural and sit down for an interview.

"I think particularly on a university campus, [art] gives students something to wonder about—think about, research,” said Anno. The ones that really work, added Bergman, are pieces that truly engage and reflect where they are located.

Contemplating how The Unfinished Dream might look different if it were painted today, the artists noted that gender fluidity and the Black Lives Matter movement would have to be represented. “We titled our mural ‘The Unfinished Dream’ because it is unfinished … still,” said Bergman.

In Gaytan's view, the mural and symbols like it can help raise awareness and inspire people to be determined and keep going in the face of obstacles. "The work is constant, and the commitment is going to be a long-term one," she said. “Being on a university campus as vibrant as UC Davis is a great place to work toward ending injustices.”

For Castro, that UC Davis is on the cusp of becoming a Hispanic-Serving Institution, or HSI, serves to show how far the university has come. “The Unfinished Dream was a mural about the work in progress, and the miles to go,” she said. “Many miles have been covered, but it’s still in progress. Still evolving.”

Liv attended the School of the Arts in San Francisco, Pennsylvania Academy of Fine Arts, and the University of Pennsylvania. She has been drawing since before she could write and has painted murals professionally since 2020.

“California poppies are so beautiful and resilient — they grow in sidewalk cracks all over California,” said Liv. “I think these large-scale poppies growing triumphantly out of the concrete of the parking structure are the perfect welcoming image for folks coming into the hospital. Resilience, beauty, kindness, and growth are all themes I thought about while designing this piece.  I'm also obsessed with using bright colors to paint happiness into all my pieces.”

"It was such a beautiful, positive experience painting this mural and I felt so welcomed by the folks here. Health care workers, in particular, are heroes in this really difficult time we're living through, and I can't thank them enough for their generosity and hospitality both to me in this very specific circumstance and in general to the citizens of Sacramento.”